I write to you concerning the First Edition of the book entitled United States Tactical Water Polo by four-time Olympic Coach Monte Nitzkowski which I have now read no less than three times from cover to cover this summer.

At the age of 31, I have achieved success in competitive swimming having competed at International level in Europe, but I now take a more active role in the Sport of Water Polo. I still compete at Masters level but a serious switch from swimming to Polo over a decade ago. By profession, I am a serving Police Officer working on the Traffic Division in Birmingham, West Midlands & I Captain the Midlands Police Team and still play the game at senior Club level.

I have recently formed a Junior Under 17 Water Polo Squad within my local Swimming Club at Stourbridge, West Midlands and they start league competition in October 1995 and conclude in March, 1996.

My first impressions of the text are highly favourable and the ideas and techniques as illustrated have formed the backbone of my training sessions in the run-up to the new season. I've been inspired by the content which is clear, concise and is written and explained in an easy to understand, practical and common sense approach designed at enhancing the role of the Coach's teaching strategy. Other books on the subject, by comparison, fail to achieve a basic comprehension in "getting the message across" due to the complexity of the script.

I am both apprehensive yet excited at the challenge that I am about to face with these young individuals. Water Polo is a team game and it is the first time in the Clubs 95 year history that a Junior Water Polo Team has been established. Hopes are high of achieving success in their first year of competition , but personally speaking, if the experience gained, coupled with the knowledge and application of the rules together with their "sportsmanship" that can be developed in a positive manner and used constructively next season - then their individuals and team performance and status will be enhanced for the benefit of the sport in the future.

That having been said, being armed with the knowledge that I have gained in reading and digesting U.S.T.W.P., it has given me the confidence and inspiration to tackle my duties as Coach knowing that the techniques have proven themselves at the highest possible level within the sport.

It is also true to say that my own personal standards of play have benefited greatly too, as a direct result of the book, and rewarded me with more time and space in creating that high percentage shot! The Police Team has also grown in confidence and results have improved to the extent of reaching the Semi-Final stage of the A.S.A Knockout Cup for the first time in their 40 year history. This came about following the implementation of one or two ideas!!

Furthermore, the recognition and respect shown by fellow players has also improved sporting relationships in my official capacity as an A.S.A Water Polo Referee.

I will write to you again in the Spring and let you know how these techniques have worked out at a Junior level in Europe, and what alternations and adaptions that I had to make, if any, to develop the team in a positive and collaborative way.

My ideas are aimed at improving the tactical side of the sport for the yield of others and, I hope, in the long-term, material produced and processed can assist you with the future editions of your book and develop the growth of the great sport of Water Polo on both sides of the Atlantic! 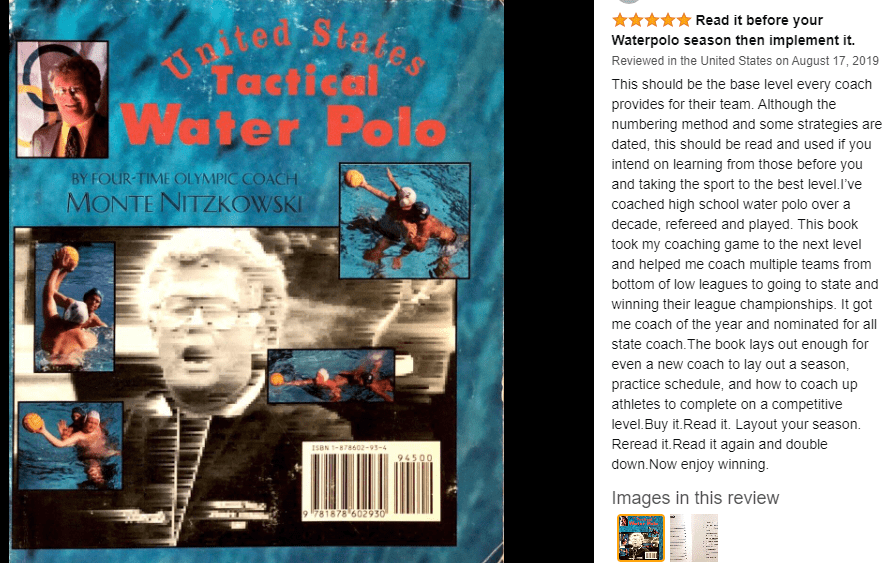 Back to Lesson
Next Lesson

Processing...
Login
Accessing this course requires a login. Please enter your credentials below!
Lost Your Password?